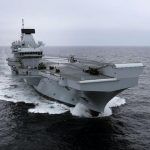 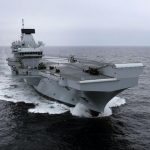 The Queen spoke at a ceremony in Portsmouth’s naval base this morning, attended by Her Royal Highness Princess Anne, Defence Secretary Gavin Williamson, Chancellor Philip Hammond and military chiefs.

In her role as the ship’s Lady Sponsor Her Majesty addressed guests before the Ship’s Commanding Officer, Captain Jerry Kyd, read the commissioning warrant. The iconic White Ensign was then raised, symbolising the commissioning of the nation’s future flagship into the Royal Navy’s fleet. 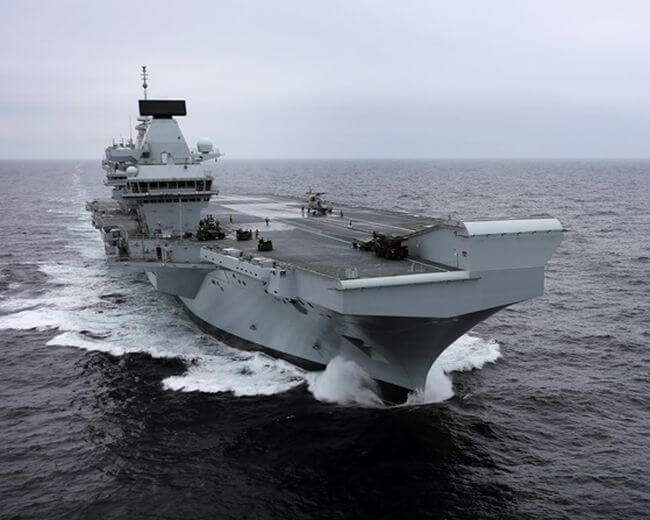 Today marks the start of a hugely significant chapter for the Royal Navy, and indeed the nation, as the future flagship is commissioned into Her Majesty’s fleet. It is an honour to witness the crowning moment of an extraordinarily busy year for the Royal Navy that has seen us name the second carrier, HMS Prince of Wales, cut steel on the first Type 26 frigates and launch the National Shipbuilding Strategy.

Our new aircraft carrier is the epitome of British design and dexterity, at the core of our efforts to build an Armed Forces fit for the future. For the next half a century both carriers will advance our interests around the globe, providing the most visible symbol of our intent and commitment to protect the UK from intensifying threats, wherever they may come from.

Having successfully completed her second stage of sea trials off the south coast of England, the carrier is back alongside at her home port of Portsmouth. Over 10,000 people across the UK have contributed to the delivery of the ship under the Aircraft Carrier Alliance.

Completing final build activity and preparing for helicopter trials in the New Year, HMS Queen Elizabeth will head to the United States for initial flight trials off the coast in autumn 2018. There are currently 150 Royal Navy and RAF personnel training in the US on our 13 F-35 jets.

The UK has worked closely on both the F-35 and carrier programmes with the US, our pre-eminent partner within NATO, enabling us to fly aircraft from each other’s ships. Both of the UK’s new carriers will be able to operate alongside NATO and coalition allies.

In hoisting the White Ensign from HMS Queen Elizabeth today, Britain has confirmed her place among the world’s great maritime powers in the most majestic and muscular terms.

The Queen Elizabeth-class carriers will sit at the heart of a modernised and emboldened Royal Navy, capable of projecting power and influence at sea, in the air, over the land and in cyberspace, and offering our nation military and political choice in an uncertain world.

But our greatest strength of all is the young sailors and marines upon whose shoulders our continued security and prosperity rests. They are starting their careers as a new chapter opens for the Royal Navy – and like all those who have gone before them, they are ready to serve their Queen and Country.

Both new aircraft carriers will be able to perform a wide range of tasks, from humanitarian and disaster relief to fighting terrorism and high-end warfighting. In what has been termed, ‘the Year of the Royal Navy’ the second carrier, HMS Prince of Wales, was named in Rosyth and is structurally complete.

This year the Royal Navy has also had steel cut on the first of the Type 26 frigates and Dreadnought submarines, the launch of the National Shipbuilding Strategy, provisioning for a new class of frigate, the Type 31e, float out of the fourth Astute submarine, HMS Audacious, the naming of two Offshore Patrol Vessels and the arrival of our first two MARS Tankers in the UK.

Last month the Defence Secretary visited HMS Queen Elizabeth for the first time while at sea, meeting the crew and thanking them for their work towards UK defence.

Congratulations from the Royal Air Force to the Royal Navy on achieving another important milestone in the UK’s Carrier Strike capability. I know the RAF and RN F-35 crews are looking forward to starting to fly from HMS Queen Elizabeth next year.