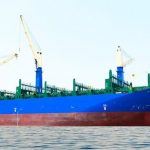 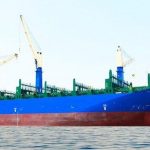 MAN PrimeServ, MAN Diesel & Turbo’s after-sales division, has signed an EMC maintenance contract with Arkas Shipping and Transport, operator of Turkey’s largest container fleet with 50 vessels. The new agreement is for the maintenance of the 2,586-TEU container carrier, the ‘MCC Mandalay’. It covers the provision of spare parts, maintenance management and the servicing of the vessel’s MAN B&W 6G60ME main engine, in collaboration with Arkas’ onboard crew.

According to the terms of the contract, MAN Diesel & Turbo, Copenhagen will deliver maintenance management and spare parts, while other MAN PrimeServ hubs will take care of the service provision for the engines.

Ali Ibrahim Kontaytekin, General Manager of Arkas Fleet, and Jens Seeberg, Head of Retrofit – Upgrade & Engine Management – PrimeServ Copenhagen, praised the cooperation between Arkas Shipping and MAN PrimeServ and stated that they view the agreement as a step towards an even closer collaboration between the two companies in the future.

The EMC is a tailor-made service model that is customised to suit individual customer’s requirements. Operating on a fixed budget, MAN PrimeServ takes care of equipment, planned and unplanned maintenance, the dispatching of personnel, and the provision of spare parts – a natural task for the engine designer.

MAN Diesel & Turbo reports the adoption of EMC by the shipping industry as a paradigm change within maintenance as, traditionally, shipowners have taken care of maintenance themselves in what is generally a conservative industry.

The close cooperation between MAN PrimeServ’s global network means that it can pool common resources and exchange knowledge, and is able to offer customers a considerably higher level of service worldwide.