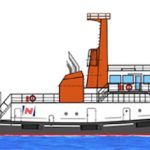 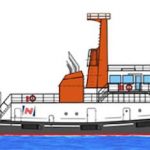 Mitsui O.S.K. Lines, Ltd. (MOL) today announced that it has signed a deal for the construction of an LNG-fueled tugboat with Kanagawa Dockyard Co., Ltd. The construction is slated to start in February 2018 and complete in February 2019. And launching is scheduled for April of the same year.

This marks MOL’s first ownership of a tugboat powered by LNG-fueled engines – produced by Yanmar Co., Ltd. – and it will be the first LNG-fueled tugboat in Japan conforming to the IGF code . It is also Japan’s first LNG-fueled tugboat with the LNG fuel tank mounted on the exposed deck at the stern of the ship. This enhances convenience in bunkering, maintenance, and inspection.

The ship will be operated by Nihon Tug-Boat Co., Ltd. and it will be deployed in Osaka Bay in April 2019. LNG fuel will be supplied by Osaka Gas Co., Ltd. (President: Takehiro Honjo, headquarters: Chuo-ku, Osaka) using a truck-to-ship system. MOL and Osaka Gas will establish an LNG fuel supply system for vessels, which will be the first in Osaka Bay and cooperate in the measures of LNG fuel supply development project conducted by Port and Harbor Bureau of Osaka Prefectural Government at the Sakai-senboku Port.

MOL will move ahead with research on practical use of an LNG fuel supply system with a detachable, portable LNG fuel tank, by adapting this design to the tugboat.

MOL has conducted various researches related to LNG fuel, such as a joint study of an LNG-fueled Capesize bulker, an Approval In Principle (AIP) for the future design of a series of LNG-powered 20,000 TEU-class containerships, and an AIP for the design of an LNG-powered coal carrier. MOL will also leverage those achievements, including the newest effort of LNG-fueled tugboat, in the development and operation of various types of LNG-fueled ships, like the environment-friendly ISHIN-II ferry, a future initiative in the “ISHIN NEXT – MOL SMART SHIP PROJECT,” and other cargo ships in the future, and takes an ongoing proactive approach to promotion of LNG fuel as a way to reduce the environmental impact of vessel operations.