Containerships And Viasea Join Forces On A New Route

Rolls-Royce To Provide Tug Sector With Its First Hybrid System 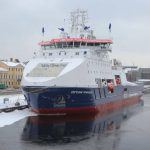 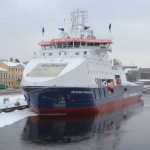 Yevgeny Primakov is one of the best vessels in her class, in terms of technical characteristics. The vessel is designed for operations in the difficult ice and navigational conditions of the Far East Sea Basin (Sea of Okhotsk).

Her design and construction reflects many years of experience accumulated by Sovcomflot (SCF Group) while working in the Sakhalin-1 and Sakhalin-2 projects. 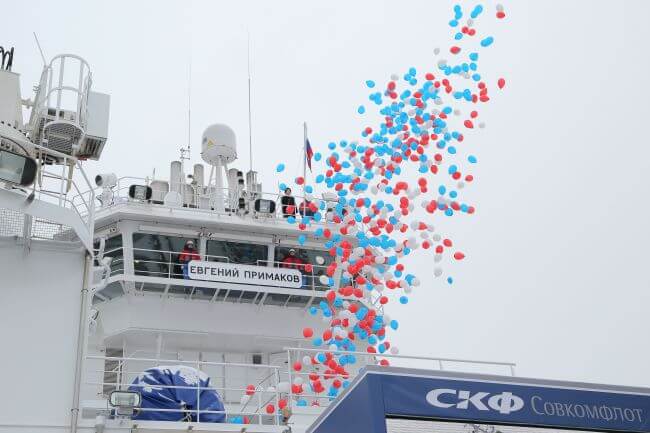 SCF Group is currently the world’s leader in the number of icebreaking supply and standby vessels under management.

The vessel’s design and equipment mean she can effectively ensure the safe operation of offshore oil and gas production platforms, including in ice conditions, through preventing the formation of hummocks and heavy ice fields around the platforms, by breaking any surrounding ice formations, etc.

The vessel will also provide standby search and rescue support all year-round. She will be able to respond promptly to potential emergencies, and carry out underwater engineering and repair works where necessary. 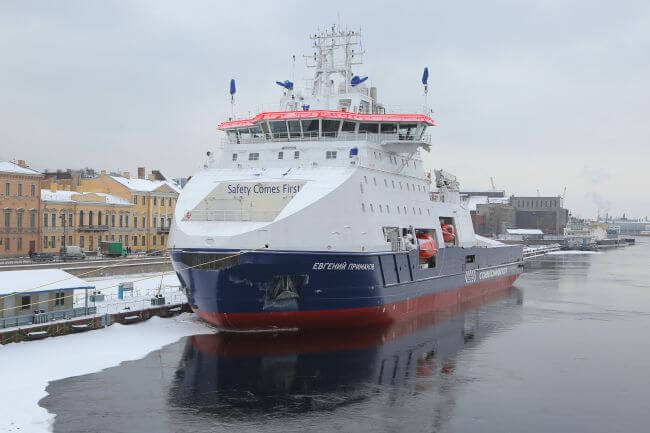 Deploying such vessels on standby duty in the Sea of Okhotsk, on a permanent basis, contributes significantly to improving environmental safety in the Far East Sea Basin.

The vessel’s propulsion system (comprised of two Azipod units with a total capacity of 13 MW) ensures high levels of manoeuvrability, and allows her to sail through ice up to 1.5 m thick with a snow cover of up to 20 cm. She also has a large passenger capacity, despite relatively small dimensions. Yevgeny Primakov can normally provide sleeping accommodation for 70 persons (besides her crew), and in the event of an emergency can accommodate up to 150 people.

Yevgeny Primakov sails under the Russian flag and has Saint Petersburg as her home port. She is manned by an all-Russian crew of 26 people.

A group of cadets from the Admiral Makarov State University of Maritime and Inland Shipping, who were selected for Sovcomflot’s training programme and will work on SCF vessels in the future, also took part in the ceremony. 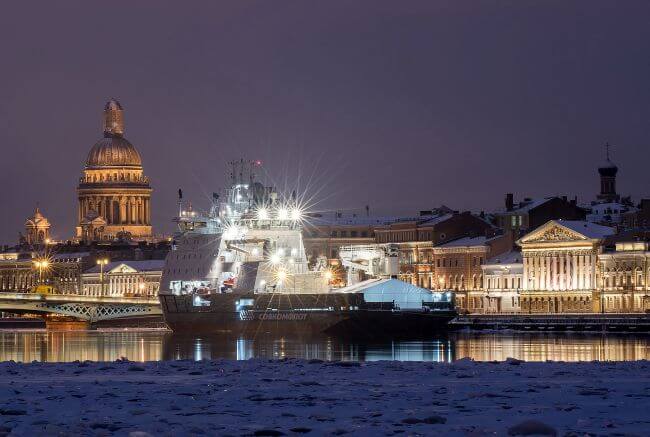 Dmitry Medvedev, Prime Minister of the Russian Federation, sent a welcoming telegram to the ceremony participants.

“Today, Sovcomflot’s new icebreaking vessel is getting a name. And it is symbolic that this will be the name of Yevgeny Primakov, a well-known statesman, politician, scientist, and diplomat. It will be the best memory of an outstanding person who always defended the national interests of our country and did a lot for Russia. The latest high-tech icebreaking vessel, Yevgeny Primakov, is one of the most advanced in her class. The execution of such a project became possible thanks to the efficient cooperation between Russian shipbuilders, shipping companies, international cooperation, and interaction between shipwrights and seafarers. I would like to thank Sovcomflot, the United Shipbuilding Corporation and all those who invested their efforts and talents in creating this vessel. I wish you good luck, success, great achievements, and calm seas,” the telegram says.

“Today’s event is important for preserving the memory of Yevgeny Primakov. The vessel will be operating in difficult conditions, including ice and low temperatures, and will be overcoming weather and sea challenges and storms – all this was in Primakov’s character. A simple vessel could hardly bear the name of Primakov, but such a vessel that will serve Russia definitely deserves his name.”

“The Far East region has been and remains a priority area for operation of Sovcomflot Group vessels – our company has been consistently expanding its presence there, serving the key energy projects on the Sakhalin shelf. The company’s fleet servicing the Sakhalin-1 and Sakhalin-2 projects numbers 20 vessels. In terms of technical equipment, versatility, and power-to-weight ratio, Yevgeny Primakov is one of the best vessels in the company’s fleet. The vessel was named after Yevgeny Primakov, a prominent statesman and a true patriot of Russia, whose decisions as Prime Minister of Russia largely contributed to the sustainable development of Sovcomflot. This vessel embodies our long-term experience in operating vessels in difficult ice conditions as well as the experience of many a generation of Russian seafarers.”