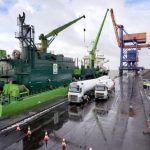 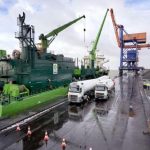 Nauticor LNG ship refuelling by Nauticor in Brunsbüttel represents a milestone in the establishment of LNG as a ship fuel on the Lower Elbe Nauticor carried out the largest LNG bunker in Brunsbüttel’s Elbe harbour to date in Germany. In the truck-to-ship bunkering, the hopper dredger “Scheldt River” was bunkered with a total of 85 tons of environmentally friendly fuel. Further LNG bunkering of the Scheldt River in Elbehafen are planned.

On Monday, February 12, the Brunsbüttel Ports GmbH Elbehafen Brunsbüttel has once again proved to be a suitable LNG bunker location. The Belgian-flagged hopper dredger “Scheldt River” belonging to the DEME Group was bunkered by liquified natural gas (LNG) by Nauticor GmbH & Co. KG. A total of 85 tonnes of LNG, delivered with 5 trucks, has been taken over by the approximately 116 m long suction dredger. 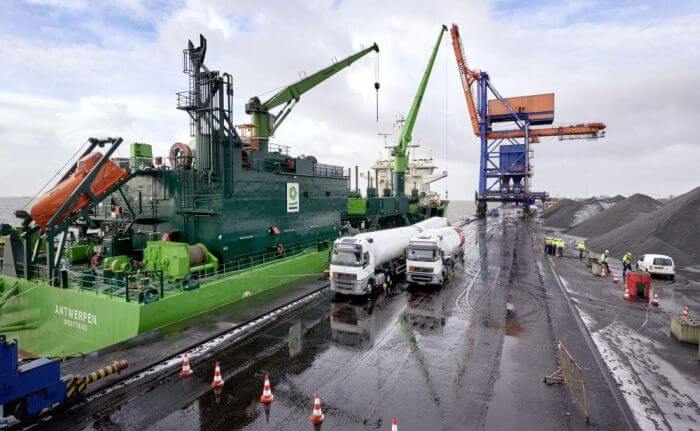 The experts at Nauticor, one of the leading LNG vendors for ships, use refuelling with a process that has already been successfully deployed several times, in which the refuelling of a ship is carried out in parallel from two LNG tankers, significantly speeding up the refuelling process. Mahinde Abeynaike, Managing Director of Nauticor, was accordingly confident: “The cooperation between the team of DEME, the employees of the harbour Brunsbüttel and our team worked perfectly. This shows once again that supplying larger vessels with LNG in Germany is already a reality today. From the end of this year, we will be able to use our new LNG refuelling vessel, which will enable significantly faster and more extensive refuelling. “

he Hopper Excavator “Scheldt River” is currently carrying out work on the Lower Elbe between Cuxhaven and Wedel on behalf of the Waterways and Shipping Authority. Further LNG bunkering of the ship in the Brunsbüttel Elbehafen is therefore planned. This will for the first time generate a sustainable demand for LNG as a ship fuel on the Lower Elbe between Brunsbüttel and Hamburg. In many parts of the shipping industry, LNG is seen as the ship’s fuel of the future. Due to the significant reduction in emissions compared to conventional marine fuels, LNG is considered to be particularly environmentally friendly. The use of LNG can significantly reduce a large number of emissions, in particular of sulfur, nitrogen, soot particles and carbon dioxide.

Carsten Lorleberg, Project Manager LNG at Brunsbüttel Ports, emphasizes: “The bunkering of the Scheldt River in Elbehafen shows that LNG is increasingly establishing itself in shipping as an alternative and environmentally friendly fuel and those bunker operations with LNG can also be easily integrated into daily port operations. We are pleased that we were again able to prove the ideal conditions of the Elbe port for LNG refuelling and thus underline our ambitions, together with our partners, of the Brunsbüttel industrial and port location as the leading LNG location, both for refuelling and for industrial purposes Use to develop in Germany. “

In the past, the first filling of the VTG LNG tank car and the truck-to-ship bunkering of the cement freighter Ireland were successfully carried out at Elbehafen Brunsbüttel, so that both the Brunsbüttel Ports and the Landesbetrieb für Küstenschutz, Nationalpark und Meeresschutz Schleswig -Holstein (LKN) as approval authority extensive experience in the planning, implementation and approval of LNG shipments in Elbehafen present. “The cooperation with the LKN in the preparation of such activities is exemplary,” emphasizes Lorleberg.

At the industrial and port location of Brunsbüttel, planning for the first German LNG import terminal is also becoming more concrete. Gasunie LNG Holding BV, Oiltanking GmbH and Vopak LNG Holding BV have recently formed the joint venture “German LNG Terminal GmbH”. The purpose is the construction, ownership and operation of an import terminal for liquefied natural gas in northern Germany. German LNG Terminal is currently focusing on the Brunsbüttel location. The proximity to the port of Hamburg and to the industrial companies located in the region offers an attractive economic environment. The Kiel Canal, which runs close to the planned terminal, makes the Scandinavian and Baltic countries easily accessible.