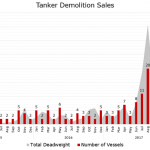 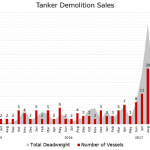 Tanker scrapping slowed in 2015 due to three key factors: Stronger spot market returns, low price being offered by buyers at the recycling yards, and the demand to store oil following the price collapse in late 2014. Each played a part as the decision to remove a ship from service varies depending on the financial situation of the owner. Some may be motivated as the $/t offered price offsets enough of their remaining mortgage on a ship to allow them to move out of a low cashflow market, while others may remove a ship after it completes a long-term storage contract. 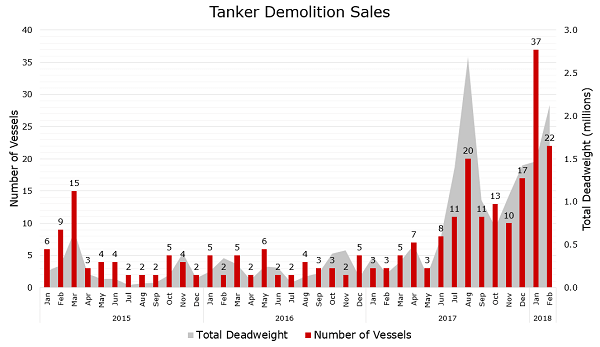 Higher spot market returns were due to higher levels of removals over the past several years combined with a low level of orders. This led to a contraction in fleet sizes in many segments.

Restrictions on emissions in China as the country grapples with air pollution issues has led to a rise in steel prices. The impact of this is seen in the global steel markets, which influences the value recyclers are willing to pay per lightweight ton. The price being offered in India for tankers and bulkers has been trending upwards since mid-2016.

The sudden drop in oil prices led to a demand for floating storage as shoreside tanks filled due to contango in the oil markets. Older ships were taken on three to 12-month charters to store oil as they were able to offer lower $/day numbers than prime (less than 10 years) aged ships. The employment of these ships removed them as scrap candidates and kept them on the water.
High scrapping and market consolidation will contribute to better returns for owners over the next several years. For the harmony of the global shipping markets continues, older units are removed in a weak market and replaced with new vessels as rates recover.