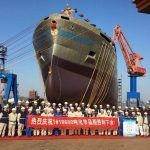 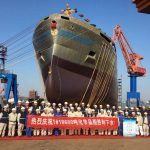 The shipping company, Ektank, has named its two new buildings, Ek-River and Ek-Stream, at the shipyard in China.Ektank’s two new tankers, which will be delivered later this year, were named by their Godmother Cecilia Johnsson, the wife of Jörgen Johnsson, CEO of Ektank, together with their daughter Sarah-Linn Johnsson. The audience also got to witness the launch of Ek-Stream, which was released from the slipway by the shipowner’s nine-year-old daughter. 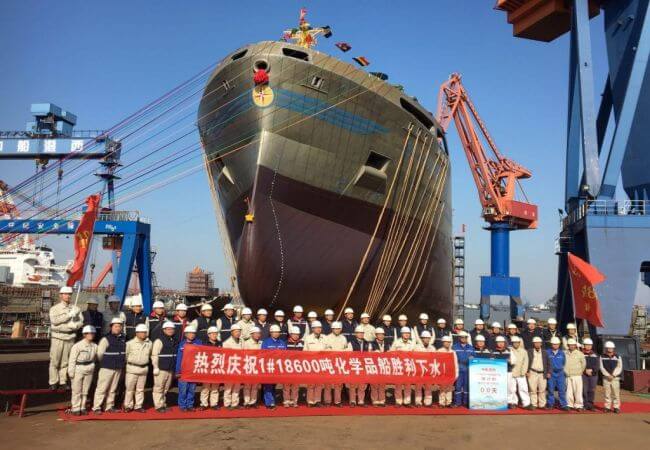 Yes, it was a special moment. It was my oldest daughter, who named Ek-Stream. She thought it was exciting to be part of this trip. She gave a little speech. For good luck and welfare, the speaker usually mentions the name in a speech as she did in English, says Ektank’s CEO Jörgen Johnsson for Sjöfartstidningen.

In the spring of 2016, Ektank placed the order for two chemical and product tankers at Chengxi Shipyard in China. Ek-River was launched back in december.

– We are pretty much according to plan, for Ek-River, the delivery will be in June of this year and Ek-Stream will be delivered after the summer. We are happy with that shipyard, with their production and the cooperation so far”, says Jörgen Johnsson, CEO Ektank.

The order includes an option for the construction of two additional vessels, but the company currently has no specific plans to exploit them.

Ek-River and Ek-Stream have a capacity of 22.700 cubic meters including slop tanks. They are 154 meter long, 23.75 meters wide and have a draught of 9.3 m and a dead weight of 18.600 tonnes. The ship’s facilities include 12 cargo tanks, two slop tanks and two drain tanks on the deck. The cargo management system can handle six different product types at the same time.

FKAB is responsible for the basic design, which is focused on the large cargo space and energy efficiency with good adaptation to future regulatory requirements. The engines are ready to be converted for operation with LNG or methanol. Jörgen Johnsson says that Ektank will await any conversion until further notice:

– The possibility exists, the engines are convertible, but we have no plans in the near future. They will be run on diesel.

He says further that the vessels will get NIS flag, which is the same as the company’s existing vessels.