‘Viking Sun’ Becomes First Cruise Ship To Be Named On The Bund, Shanghai 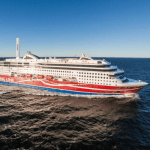 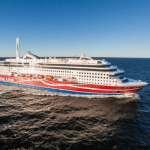 VIKING’S Fourth ocean ship, Viking Sun, was officially named during a spectacular celebration on The Bund, in the heart of Shanghai. The ship is currently sailing Viking’s sold-out 141-day World Cruise from Miami to London, and its stop in Shanghai marks the first time one of Viking’s ocean ships has called in China. Viking Sun is also the first-ever cruise ship to be named on the Bund in Shanghai. Classified as a “small ship” by Cruise Critic, the 930-guest, 47,800-ton Viking Sun arrived in Shanghai this morning, navigating into the mouth of the Yangtze River and then up the Huangpu River into central Shanghai, where she received a warm welcome from local residents and boats in the harbour.

“I am very pleased to officially name our newest ship in Shanghai. We care deeply about tourism in China, and we have been bringing river cruise guests here since 2004,” said Torstein Hagen, Chairman of Viking. “China is the home of Viking Sun’s Godmother, Mrs. Yi Lou, and in the coming year, Shanghai will also welcome our fifth ship, Viking Orion. We look forward to introducing thousands of new travelers to the cultural treasures in Shanghai and throughout China.” 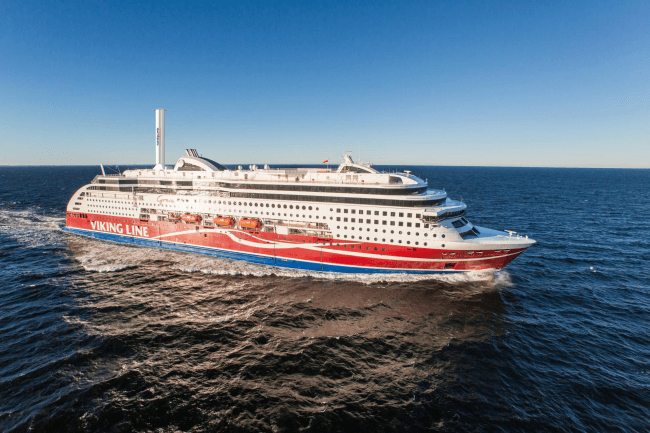 After arriving today, Viking Sun was positioned at the Shanghai Port International Cruise Terminal, adjacent to a concert stage constructed specifically for the celebration. Viking’s World Cruise guests and international dignitaries were treated to high-tech show and musical concert on the waterfront that paid tribute to the special friendship between Norway and China. On a giant wave-like screen built alongside the ship, a projected animation depicted the story of silk – the ancient trade that has formed a cultural bond between Norway and China. Shanghai television personality Michelle Wang served as master of ceremony and introduced musical performances from the Shanghai Philharmonic Orchestra and acclaimed Chinese operatic tenor Dai Yuqiang, as well as Norwegian singer Sissel Kyrkjebø, who is widely considered one of the world’s top crossover sopranos.

Mrs. Yi Lou, Vice President of China Merchant Bank Financial Leasing (CMBFL), served as ceremonial godmother and offered a blessing of good fortune and safe sailing for Viking Sun – a naval tradition that dates back thousands of years. In keeping with the naming custom, Mrs. Yi Lou also cut a ribbon that allowed a bottle of Norwegian aquavit to break on the ship’s hull.

Viking Sun will set sail from Shanghai for Southeast Asia and India, before making her way through the Red Sea and the Suez Canal into the Mediterranean – essentially following the route of the 21st Century Maritime Silk Road or “One Belt One Road” Initiative. When the ship arrives in London on May 5, she will have visited five continents, 35 countries and 64 ports during her first World Cruise. Viking Sun will continue to sail the globe during the 2019 World Cruise, a 128-day itinerary from Miami to London.

While this is the first time one of Viking’s ocean ships has called in China, the company has a long history with the China tourism industry. Operating river cruises on the Yangtze since 2004, Viking has been one of the largest sources of inbound travelers from North America. In 2016, Viking began offering a new river cruise product designed specifically for Chinese travelers who wish to travel to Europe. Sailing on Viking’s award-winning Longships, Chinese travelers experience a Mandarin-exclusive environment – with all signage in Mandarin and all staff and tour guides fluent in Mandarin. These dedicated 190-guest Viking Longships are the first Mandarin exclusive hotel environments for Chinese travelers in Europe. And expanded for 2018, Viking will offer 100 sailings on the Rhine and Danube rivers, dedicated specifically for Chinese guests.

Viking’s ocean ships have a gross tonnage of 47,800 tons, have 465 staterooms and host 930 guests. Classified by Cruise Critic® as a “small ship,” the all-veranda Viking Sun is the newest addition to Viking’s award-winning ocean fleet, which also includes Viking Star®, Viking Sea® and Viking Sky®. Viking will welcome two more sister ships in the next two years, including Viking Orion® in June 2018. With the arrival of Viking Jupiter® in 2019, Viking will be the largest small ship ocean cruise line. Ten additional ships are also planned for delivery starting in 2021, which could bring Viking’s ocean fleet to 16 ships by 2027.

Designed for discerning travelers with interests in history, art, music and cuisine, Chairman Torstein Hagen often says Viking offers guests “the thinking person’s cruise” as an alternative to mainstream cruises. Ships are small to get guests closer to their destination, with more time in port and more overnights. On board, guests find serene Scandinavian spaces, where every room is both beautiful and functional, quiet and filled with light. With the most al fresco dining opportunities at sea, featuring regional cuisines and always-available American classics, Viking’s guests can truly dine in their destination. A focus on cultural enrichment brings immersive experiences ashore and on board. And only The Viking Way of Exploration provides guests with itineraries that feature Local Life, Working World and Privileged Access experiences.

In addition, Viking offers the best value at sea, with each cruise fare including much more than what competitors offer—an included value of more than $200 per person per day for an average cruise. Every cruise fare includes an exterior stateroom, a complimentary shore excursion in each port of call, all onboard meals, and all port charges and government taxes. Guests also enjoy many complimentary amenities as part of their fare, including: beer and wine with lunch and dinner service; alternative restaurant dining; Wi-Fi; self-service laundry; access to the Thermal Suite in the LivNordic Spa; and 24-hour room service.