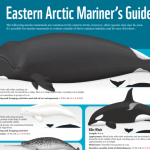 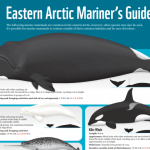 A new WWF-Canada guide designed to help mariners in the eastern Arctic identify and avoid marine mammals is being unveiled at a Canadian Marine Advisory Council meeting in Montreal today. With summer sea ice on the decline and industrial pressures increasing, shipping traffic in the Canadian Arctic has steadily risen. This is especially true in the eastern Arctic and around the community of Pond Inlet and the Mary River iron ore mine. Ships servicing the Baffinland mining operation are increasing at a staggering pace, jumping from 10 transits in 2014 to upwards of 160 transits predicted this year. This new and changing reality has prompted World Wildlife Fund Canada to publish the Eastern Arctic Mariner’s Guide, to help mariners minimize shipping-related disruption to wildlife and northern communities.

WWF-Canada is putting the guide directly into the hands of shipping company owners, operators and federal regulators. This guide was developed after the success and broad adoption of the Mariner’s Guide to Hudson Strait, published last year. 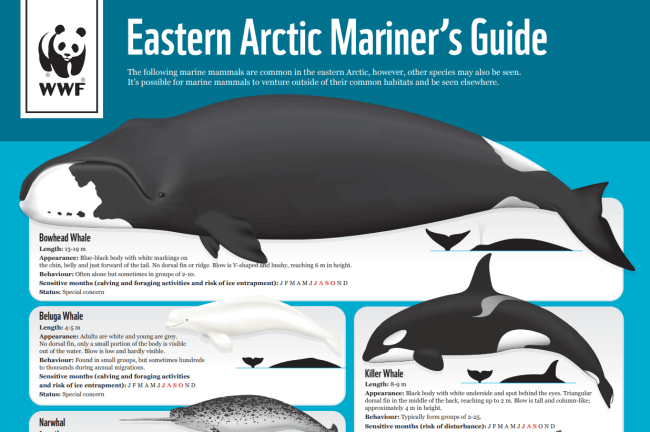 Paul Crowley, vice-president of Arctic conservation for WWF-Canada, says:
“The enthusiasm with which the original Mariner’s Guide was voluntarily adopted by industry clearly showed a need and a desire for a tool of this kind, to help mariners minimize disruptions to important habitat. Without this kind of information built into voyage planning, mariners have no way of knowing when they are crossing through sensitive wildlife areas or community travel routes. While the willingness to plan wildlife-friendly routes and limit impacts on communities may be there, the ability to do so in the eastern Arctic was limited before now.”

“During the early stages of the development of the guide, WWF met in Pond Inlet with members of the Asungasungaat Area Co-management Committee for Bylot Island Migratory Bird Sanctuary. The Canadian Wildlife Service convenes community members in this committee to issue review permit applications and discuss management planning for the area in and around the Bylot Island Migratory Bird Sanctuary. Shipping impacts are a significant concern to the committee and it is felt that more awareness of permitting requirements, sensitive areas and community travel routes and uses is needed to reduce impacts in the region. The Mariner’s Guide is a good tool to do that. Our hope is that all ships will have a copy on board and follow the guidelines to limit disturbance in the area.”

“In its newly released Eastern Arctic marine mammal graphic pictorial guides, WWF has once again produced invaluable references for mariners to refer to while passage planning and executing voyages in Arctic waters. The simple, descriptive graphics provide mariners with both excellent marine mammal species identification for those mammals that might be encountered in these waters, as well as locations of conservation and sensitivity that should be avoided. Well done WWF.”

“Shipping around my community of Pond Inlet has drastically increased over the past few years, mainly due to tourism and ships servicing the Baffinland mine. Activities like these have the potential to interfere with community uses, disturbing and disrupting our ability to feed our families. The WWF Mariner’s Guide is very informative. It allows the shipping industry to become aware of important sensitive areas, reducing impacts and conflicts in my region.”