The 3,500 m³ Trailing Suction Hopper Dredger Diogo Cão was launched last Saturday at the Keppel Nantong shipyard in China, a subsidiary of Keppel Offshore & Marine. This green vessel is the second of three 3,500 m³ hoppers to be launched, equipped with an exhaust gas treatment system filtering out and virtually eliminating many pollutants from the exhaust gases. In total, Jan De Nul Group ordered six such ultra-low emissions Trailing Suction Hopper Dredgers, called Ultra-Low Emission Vessels, five of which are being built at Keppel: three small 3,500 m³, two medium-sized 6,000 m³ and a larger vessel at 18,000 m³. 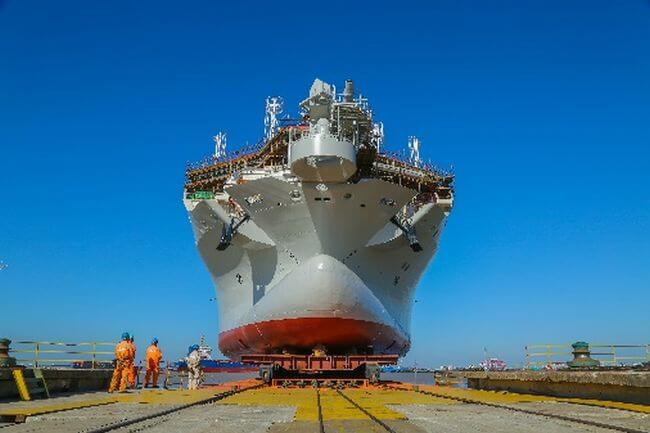 All six vessels are diesel-electrical powered, with engines allowing optimal use of generated power but with low fuel consumption and emissions. In addition, the vessels are equipped with a two stage highly efficient exhaust gas filter system, resulting in emissions complying with the European Stage V regulations for inland waterway vessels.

“We are delighted to be leading the way in compliance with the most stringent global emission limits with the world’s first EU Stage V dredgers, which will be highly fuel-efficient, reliable, versatile and productive,” says Robby De Backer, New Building Director at Jan De Nul Group. “Their use will enable dredging projects to be completed with the lowest levels of emissions to date.”

“As the new dredgers will frequently operate in estuaries, rivers and coastal areas near urban areas, we decided to limit the NOx emissions to a level 30% below the actual IMO Tier III requirements, and to reduce other potentially harmful contaminants that are currently not regulated by IMO,” says De Backer.

The singularity of not choosing clean-burning fuels

In a world of climate change and overall environmental consciousness, Jan De Nul Group has chosen to design and build its latest generation of dredging vessels, running on diesel and equipped with exhaust gas after-treatment system. Ambient air in urban environments often contains all kinds of particles and other toxic substances. Jan De Nul aims at minimising its contribution to manmade dangerous pollution sources in those urban areas.

By doing this, Jan De Nul takes a different approach than others who have chosen clean-burning fuel vessels. “Our main target from the start was: how can we lower the air pollution caused by dredging vessels?” says Michel Deruyck, Fuel Coordinator at Jan De Nul Group. “We focus on the impact that maritime transport and port development have on public health and ambient air quality. During the new dredger design phase, we looked at different options and technologies, with the goal of maximising pollution reduction or elimination, and preparing for the stricter European land and inland waterways emission regulations Stage V, due for implementation in 2020.”

The maritime transport regulator International Maritime Organisation (IMO), states that clean burning fuel vessels have to comply with the IMO Tier III regulation. The European regulations on land, Stage V, are far stricter. Mainly because for the first time, particles emitted down to 23 nanometers are taken into account.

The new vessels will operate with normally available ultra-low sulphur gasoil, with the exhaust gas treated in two stages by means of a Selective Catalytic Reduction (SCR) system, and a Diesel Particulate Filter (DPF). The SCR system lowers NOx to achieve EU Stage V levels for inland waterways. The second stage DPF removes particulates from the exhaust, also down to the future EU Stage V levels. Eliminating black carbon emission with the DPF significantly reduces the climate impact of these vessels.

Jan De Nul Group chose technology based on the Swiss example of filtering exhaust gases in the tunnelling industry. “Since the 1990s, the tunnelling industry has used exhaust gas filtration on vehicle and heavy-duty machinery emissions to provide clean, breathable air for workers tunnelling under the Alps,” adds Michel Deruyck. “Today we are applying the same filtering techniques on our new vessels, and by accounting for particle numbers we obtain a 99% filtration efficiency and detoxification by catalysis.”

The design of the Diogo Cão is based on the successfully operating 3,400 m3 TSHD Alvar Nuñez Cabeça de Vaca and Sebastiano Caboto, built in 2011. The vessels combine a shallow draught with high manoeuvrability, making them very suitable for working in confined areas.

The Diogo Cão is in diesel-electric execution: all major drives (thrusters, dredge pump, jet pumps…) are electrically driven and controlled by means of frequency converters. In this way each system can operate at its optimal speed and power. Power is generated by means of three diesel generator sets. A control system automatically starts and stops the sets depending on the power requirement. Asymmetric load sharing results in optimal load distribution over the diesel generator sets. All these measures result in a low fuel oil consumption, which is the best in its class.

Now the Diogo Cão is launched, the keel laying of the first 6,000 m³ vessel is planned to take place on 19 July at the Keppel Singmarine in Singapore.