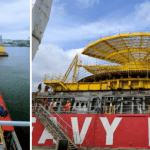 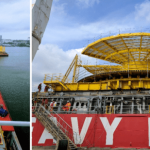 HANSA HEAVY LIFT has transported a giant carousel together with eight reels, weighing a total of 3,508.7 metric tonnes, from Newcastle, United Kingdom to Lagos, Nigeria destined for the Egina Oil Field.

The voyage took place on board the super heavy lift vessel HHL Lagos, which was mobilised in Rotterdam, the Netherlands, to prepare the vessel with additional deck strength for the extra-large carousel, which weighed over 2,200 metric tonnes including spooled product and had a diameter of over 25 metres.