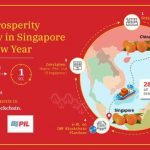 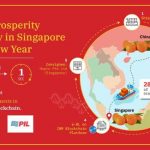 Pacific International Lines (“PIL”) has used an electronic Bill of Lading (e-BL) built on the IBM Blockchain Platform in a successful real-time pilot tracking shipment of mandarin oranges from China for the Lunar New Year celebrations.

With the use of IBM Blockchain powered e-BL, the trial has produced a significant reduction in the administrative process of transferring the title deed from five to seven days to just one second. 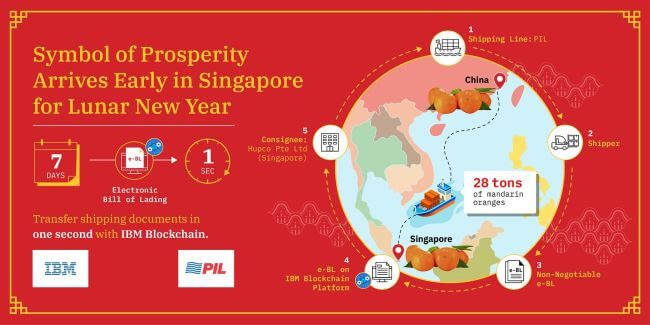 This is significant because the Bill of Lading is one of the most crucial documents used in international trade, typically issued by a shipping carrier to document the title or ownership of goods. It also functions as a receipt of goods and a contract of the shipment.

Combining e-BL with blockchain technology promises to help companies reduce their document processing times to almost zero, with an instantaneous digital transfer of the bill of lading for their cargo. Document handling is automated, and goods delivered more quickly and efficiently.

Mr Tay Khiam Back, Chairman and CEO of Hupco said: “We are delighted with the outcome of the trial. By using the e-BL, we have seen how the entire shipment process can be simplified and made more transparent with considerable cost savings.

Our customers can expect their orders in a more timely manner, and, importantly, with freshness assured.”

As a symbol of prosperity, mandarin oranges are a common – and welcome – sight during the Lunar New Year in Asia, with people exchanging them as greeting gifts and eating them during the festive celebrations.

For this trial, the consignee (Hupco) benefited from collecting their goods faster with the immediate receipt of the electronic Bill of Lading.

They also benefited from:

• Lower operating costs such as electricity costs (charging for refrigerated cargo containers at the port while waiting for collection), storage costs (at port) and cost savings from enhanced equipment utilization;
• Stronger provenance and real-time visibility of documents which is both traceable and tamper-proof;
• Greater security by helping prevent document fraud, which comprises 40% of all maritime fraud.

The live trial follows the e-BL Proof of Concept which was announced in October 2018.* PIL and IBM collaborated to digitize the lifecycle of negotiable and non-negotiable Bills of Lading on top of distributed ledger technology. The live trial is an important milestone because it validates how the system works in real-time conditions.

Lisa Teo, Executive Director of PIL, said: “We are pleased with the steady progress of our blockchain collaboration with IBM. To-date, we have received very positive feedback from the industry and authorities, and we are enthused by the possibilities of how our blockchain developments can transform and inject a much-needed boost in efficiency and innovation into the industry.”

Harriet Green, CEO and Chairman of IBM Asia Pacific, said: “A blockchain-based trade network will be a game-changer, and we have a great opportunity here with our partner PIL to revolutionize the documentation processes in a way that benefits the entire industry. Powered by blockchain, the e-BL developed by the IBM Research Singapore will be critical in helping to establish an extensible ecosystem for trade, thus expectedly enhancing trade efficiency and building trusted trade relationships among the industry players.”

The e-BL platform gives various ecosystem players the convenience to manage a Bill of Lading digitally with accuracy and speed, including banks. A similar trial from Singapore to Brunei has taken place for negotiable e-BL with key stakeholders participating including Bank of China Limited Singapore Branch (BOC). The negotiable e-BL network establishes an extensible ecosystem which facilitates trade transactions and settlements, as the process of issuing Letter of Credit and Guarantee is enhanced.