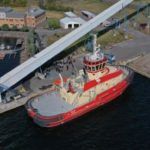 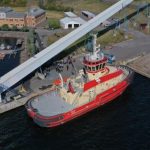 On Tuesday the 20th of August in the Port of Luleå, Sweden, the most powerful ice-breaking tug of this size, TundRA 3600-H (Hybrid) tug VILJA was christened.

About 100 people witnessed as the Board Chair Ms. Birgitta Ahlqvist broke the bottle-shaped ice sculpture specifically made for this event. Some of the speeches had to be cut short due to rapidly melting ice as the crowd was treated with a warm summer day.

This 36-metre tug is yet another significant achievement of Robert Allan Ltd. The hybrid propulsion system and the use of batteries provides the vessel with flexibility and efficiency to perform its task year-round. 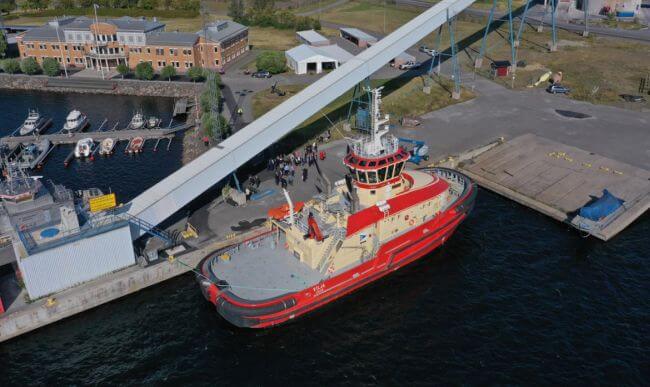 The tug will be capable of operating entirely on the electrical battery power feeding shaft-driven motor-generator sets as well as the ship’s load only or by utilizing a single main engine in the hybrid diesel-electrical mode driving both shafts via the same motor-generator sets producing a bollard pull of up to 55 tonnes, or by the two main engines in direct diesel-mechanical mode supplemented with available battery boost bringing the total available bollard pull up to 100 tonnes.

During the first year of operation the various operation modes will be fine-tuned to satisfy the operational requirements and the environmental conditions. The ice-breaking capability is 1 metre of ice thickness at 3 knots of vessel speed. 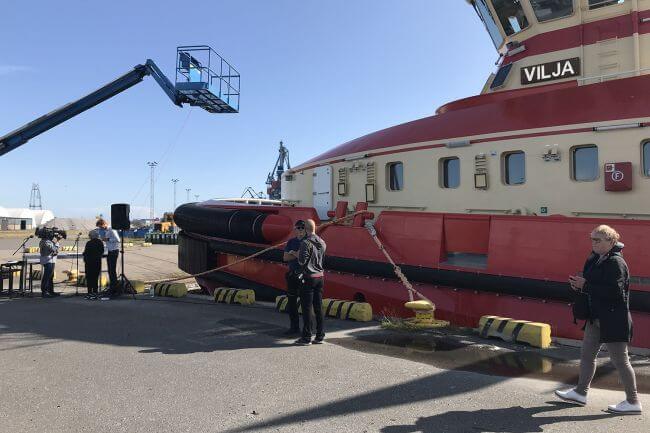 The TundRA 3600-H tug VILJA has the following vessel particulars: