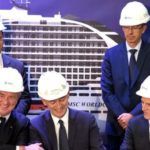 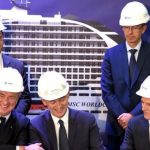 On the occasion of the cutting of the first steel ceremony of the first LNG-Powered cruise vessel to be built in France, MSC Cruises MSC Europa, held in Saint-Nazaire (France), MSC and Chantiers de l’Atlantique unveiled a groundbreaking R&D project named PACBOAT.

The project focuses on the integration of a new fuel cell technology demonstrator onboard the first of four MSC Cruises’ World Class of vessels, due for delivery in 2022.

This demonstrator, with an output power of 50KW, will produce electricity and heat using Liquefied Natural Gas (LNG), the fuel used to produce energy on MSC Cruises’ World Class ships. The announcement was marked by the signing of the consortium agreement between the various partners involved. 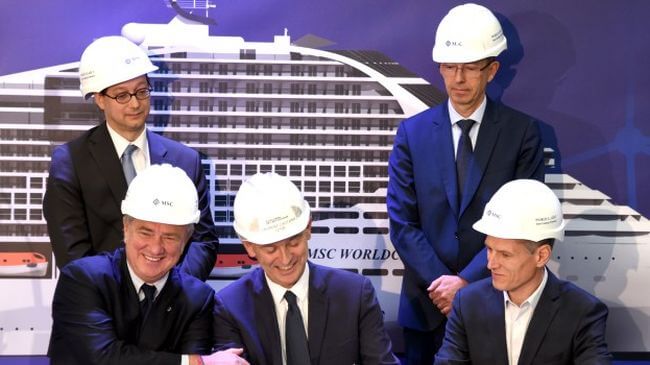 AN INNOVATIVE AND MORE ENVIRONMENTAL-FRIENDLY SOLUTION

The integration of a Solid Oxide Fuel Cell (SOFC) technology onboard a cruise ship is a world first. This technology, which operates at very high temperature (~ 750 ° C), is the most efficient for high-power marine like applications than the low-temperature Hydrogen-based Proton Exchange Membrane Fuel Cell (PEMFC) solutions, used for instance in the automotive sector.

The SOFC technology offers a very good electrical efficiency up to 60%, and as the heat produced can be self-consumed on board, its total efficiency – heat and electricity – can be much higher, resulting in a direct reduction of energy consumption and therefore of greenhouse gas (GHG) emissions.

This SOFC solution fueled by LNG would thus reduce emission of GHGs by about 30% compared with a conventional dual fuel LNG engine, with no emission of nitrogen oxides, sulfur oxides or fine particles. In addition, it offers the advantage of being compatible with many fuels (LNG/methane, methanol, ammonia, hydrogen, etc.), and thus with their future low carbon versions.

Pierfrancesco Vago, executive chairman of MSC Cruises, stated: “We are pleased to be able to support this highly innovative project, as it further demonstrates our commitment to contributing to the development of next-generation advanced environmental technology for the benefit of the entire industry. This is a key element in our journey towards zero-emissions operations both at sea and ashore.”

Led by Chantiers de l’Atlantique, PACBOAT is based on a cutting-edge SOFC technology developed and patented by the CEA. It is funded by the French government’s Investments for the Future Program (PIA) and supported by ADEME, the French Environment and Energy Management Agency.

Additionally, it is part of the Ecorizon® R&D program dedicated to the energy and environmental efficiency of ships and launched in 2008 by Chantiers de l’Atlantique. Entrepose Group, the France based international contractor that designs, builds and operates production, transport and storage infrastructures for the oil & gas and other energy markets, will ensure the design and the construction of the demonstrator, whose installation and operation will be approved by Bureau Veritas, one of the world’s leading players in testing, inspection and certification services.

Together with the other solutions developed under the Ecorizon® program of Chantiers de l’Atlantique, this innovative solution will make it possible to exceed the future regulatory requirements for emissions for new ships by 2030 and 2050.

It is also an important technological breakthrough to head for the definition of “zero-emission” ships that will meet the ambition of the new European Commission to make Europe the first continent with a carbon neutral impact.

(“European Green Deal”) by 2050. It is by no coincidence then that this project will be first deployed on a ship called MSC Europa.

ENTREPOSE: Designer and Manufacturer of the module Entrepreneur