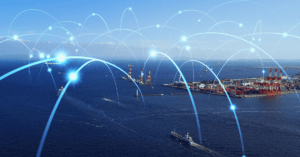 Ministry of Ports, Shipping and Waterways (MoPSW) signed an MoU with Ministry of Skill Development and Entrepreneurship (MSDE) on 20th August, 2020 to jointly undertake the skill development and to harness the innate capabilities in Ports & Maritime sector and enhance their capacities and skills to deal with the rapidly changing competition and provide for port led prosperity as per the objectives of Sagarmala Programme and Pradhan Mantri Kaushal Vikas Yojana (PMKVY). MoU establishes a framework of collaboration between MoPSW and MSDE.

Additionally, MoPSW also signed another MoU with Ministry of Rural Development (MoRD) in May 2017, which has been extended in April 2022, for skill development in maritime sector on convergence mode of Deen Dayal Upadhayay-Grameen Kaushalya Yojana (DDU- GKY) and Sagarmala.

Multi Skill Development Centre (MSDC) is operational at Jawaharlal Nehru Port Authority (JNPA). Total 57 Qualification Packs (QPs) are being implemented under DDU-GKY Sagarmala convergence programme. Further, it is envisaged to develop 10 Qualification Packs (QPs) under the MoU signed between MoPSW and MSDE. Apart from MSDCs in Major Ports, several skill development centres have been setup through Project Implementing Agencies (PIAs). Under the DDU-GKY-Sagarmala convergence and PMKVY, more than 4,000 persons have received training for skilling, reskilling and upskilling.

Since the commencement of skill development training programs, Rs. 77.02 Cr. have been sanctioned and Rs. 36.29 Cr. funds have already been released to States / UTs under DDU- GKY Sagarmala Convergence.

This information was given by Union Minister for Ports, Shipping and Waterways Shri Sarbananda Sonowal in a written reply in the Lok Sabha.