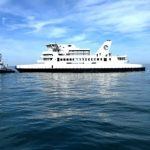 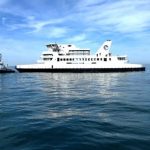 The M/V Twin Capes, a ferry christened 43 years ago on the Delaware Bay and retired after thousands of runs between her namesakes Cape Henlopen, Del. and Cape May, N.J., was sunk to become part of Delaware’s acclaimed artificial reef system. Twin Capes, whose sinking will expand and enhance fish habitat and offer extraordinary opportunities for deep-sea diving, went down at 11:55 a.m. on the Del-Jersey-Land Inshore Artificial Reef – a reef so named because it lies equidistant from Lewes, Del., Cape May, and Ocean City, Md. 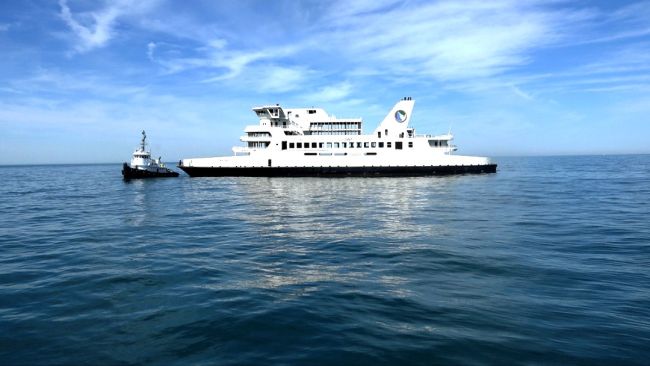 The Twin Capes’ sinking was carried out by Norfolk, Va.-based marine contractor Coleen Marine, which bought the ferry from the Delaware River and Bay Authority (DRBA) last year for reefing. Twin Capes joined the Del-Jersey-Land reef’s submerged fleet that includes the ex-destroyer USS Arthur W. Radford, which went down in 2011 as the longest ship reefed on the East Coast, and the Zuni/Tamaroa, the one-time harbor tug and Battle of Iwo Jima survivor turned US Coast Guard cutter that plied Atlantic waters for almost 50 years.

While Radford, at 568 feet, remains the longest ship ever reefed on the East Coast, the 320-foot long Twin Capes may be the best addition yet to Delaware’s artificial reef system for both fishing and recreational diving opportunities.

The 2,100-ton ferry was one of the original three vessels of the DRBA’s 1970s fleet. Twin Capes during the 1990s was retrofitted with a new superstructure and four new decks, multiple lounges, a new pilot house, and “shark-fin” smokestacks. All these features lend to the creation of enhanced fish habitat, while for dive trips, Twin Capes’ 70-foot vertical profile will attract tunas, sharks, and seasonally even barracudas.