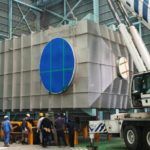 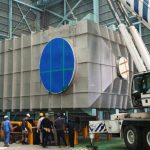 Starting 1 January 2020, the International Maritime Organization (IMO) will enforce a new 0.5% global sulfur cap on fuel content, lowering from the present 3.5% limit. As the ultimate goal of the regulation is to reduce SOx emissions in shipping, the industry stakeholders are devising potential solutions such as fuel switching and SOx scrubber.

To support the shipping industry in meeting the 2020 sulfur cap, POSCO is more prepared than ever – with its capacity to mass-produce high-grade stainless steels for SOx scrubbers; and its superb welding technology optimized for steels. 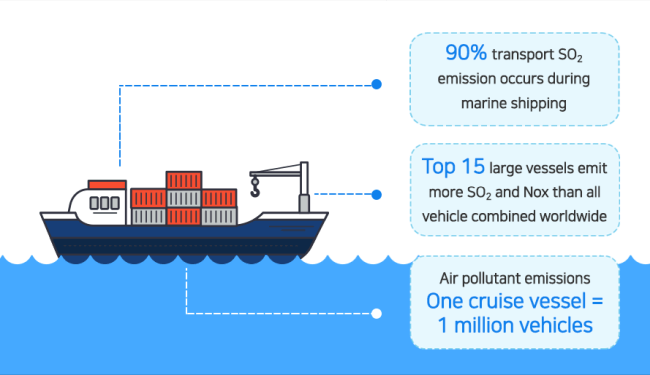 Without a doubt, the environmental impact of ship fuel is fatal.

The non-complying countries will be barred from 174 ports worldwide – the IMO member states. No wonder why the new regulation is cited to be one of the strongest in shipping history. To deal with the new sulfur cap, the shipping industry faces the following three options at this time.

The SOx scrubber technology removes about 90% of the sulfur oxides from the exhaust gas of ship engines, thereby reducing the sulfur oxides emission. The scrubber allows the continued use of high-sulfur fuel oil (HSFO) which is low-cost. For the next five years, the scrubber will be applied to over 12,000 vessels. Producing and installing scrubbers take about nine months – so to meet the new 2020 IMO regulation, the shipowners must complete the installation within this year at the latest. 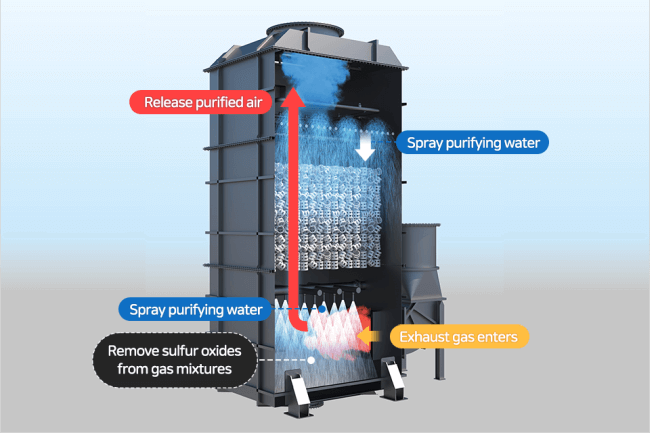 Since last year, Korea’s demand for SOx scrubber has skyrocketed. Currently, Hyundai Power Systems, Kangrim Heavy Industries & Kangrim Insulation and STI Co. Ltd. are trying to dominate the market. Earlier last year, the landscape for scrubber production was quite different – only a handful of overseas companies were producing a limited amount of steels for scrubber production. With no domestic companies providing base materials for the scrubber, Korean companies faced major challenges to meet the increasing demands – high material costs and over eight-month-long production period.

This is where POSCO came in – with high alloy stainless steel S31254.

The typical steel used for the SOx scrubber is ‘6 moly alloys’, named for their 6% molybdenum content. Depending on the scrubber design, 6 moly is used to over 55% of a scrubber body. Not only is S31254 steel one of POSCO’s World Top Premium (WTP) products, the company has the capacity to mass-produce S31254.

The new IMO 2020 had been announced back in 2016. Since then, POSCO sought after the influential industry stakeholders – shipbuilders, designers, and shipowners, etc. – at home and abroad to assess, predict and respond accurately to the changing industry demands. 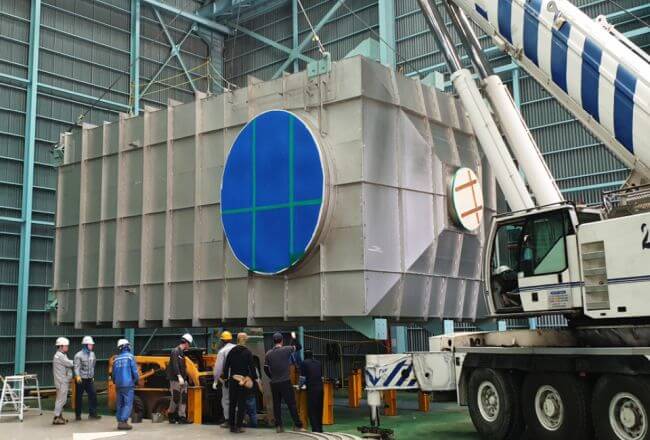 Of the three options the shipping industries face (Fig 2.), Korean companies were leaning towards the scrubbers hence the demand increase. As demands for scrubbers skyrocketed, POSCO initially predicted the demand for 6 moly steel, including POSCO’s S31254, would increase also – by about 130,000 tons, for the next five years from 2019. As it turned out, however, the annual global supply of the material was under 10,000 tons – the mismatch between supply and demand was severe.

POSCO developed the S31254 long time ago, but due to the lack of demand, the company didn’t take it as far as mass production. The challenge was that the steel thickness required for SOx scrubbers was 4 to 6 mm – and with high strength properties, it is difficult to guarantee uniform thickness for the S31254 steel in the conventional production process.

Although mass-producing S31254 was tricky, because POSCO had already completed product development, POSCO’s CFT was able to bring S31254 to the market – as its WTP no less. POSCO is the only Korean steelmaker who can produce steel exclusively designed for scrubbers. 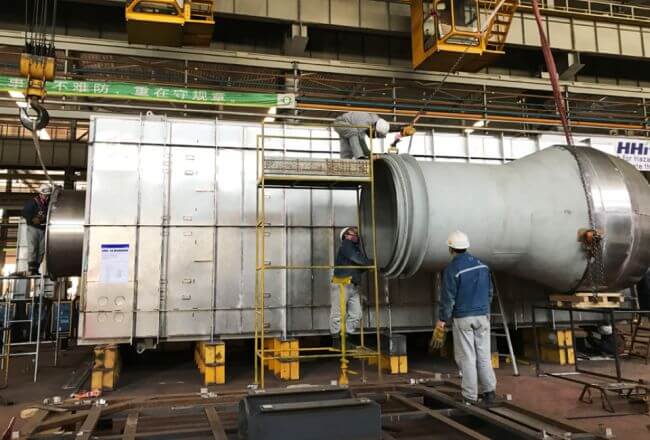 Beyond product development, POSCO CFT also provided welding solutions for customers who had limited experience with high-alloy stainless steel. Welding is a crucial technology in shipbuilding – first because it affects production cost; and because welding has the final say on the product quality.

POSCO conducted exclusive research to identify the optimal welding technology and materials for S31254 steel. The company performed on-site visitations to the customer companies to provide welding training. It is a little known fact that POSCO dedicates a group of employees who specialize in welding solely dedicated to customer support. This is how POSCO maximizes its solution capacity by providing utilization technology for every new steel grade they develop.

With stable mass-production of the S31254, it is being manufactured for scrubbers at plants in Korea and abroad. The Hyundai Power Systems representative, for which POSCO supplies steel, said, “Not only does POSCO promptly supply domestic steel, the company also provides welding solutions. I believe we are showing a good example of mutual collaboration between the steel and shipbuilding industry.” Other feedback on POSCO’s S31254 steel is that it has excellent surface quality, hardly any scratches are visible. The SOx scrubbers applying POSCO steel are set to sail around the world from the end of this year. 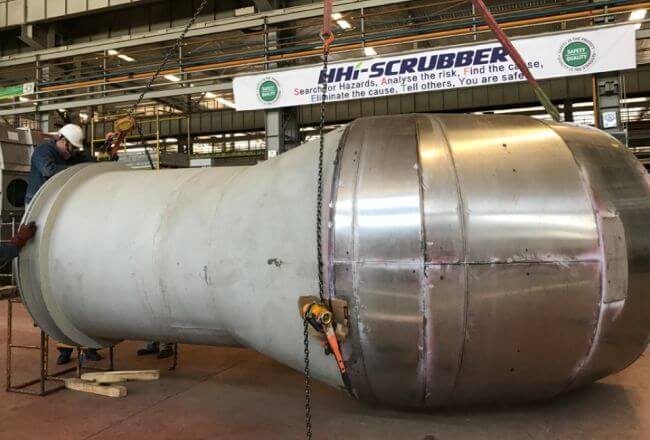 Currently, Europe dominates 60% of the scrubber market – the rest 40% by in Korea and East Asia. Now that the company succeeded in mass-producing the S31254, POSCO plans to target some of the big manufacturers abroad. Furthermore, POSCO’s supply of S31254 steel isn’t confined to ship desulfurization facilities as the company plans to target inland desulfurization facilities and dust collectors in thermal power plants.

Young-Hwan Kim, a researcher at the POSCO Technical Research Laboratories who led the development and sales of the steel said, “Due to the tighter environmental regulations, the high-alloy stainless steel market is rapidly changing. The collaborative effort of multiple departments – production, sales, and research – helped create a new market.” He continued, “Supplying steel materials to customers who previously had difficulty in obtaining the material was most rewarding. Furthermore, we would like to grow to become the top player for high alloy steel in the global market.”

In recent years, environmental standards are becoming more exacting. POSCO is continuously developing eco-friendly steels for the auto industry, construction sectors as well as the shipbuilding and offshore industries. With its steel expertise accumulated over half a century and the new “Business with POSCO” principle, POSCO will continue seeking solutions for its customers providing top-quality products and services.